Heavy and dense cloud, with a considerable vertical extent, in the form of a mountain or huge towers. At least part of its upper portion is usually smooth, or fibrous or striated, and nearly always flattened; this part often spreads out in the shape of an anvil or vast plume.

Under the base of this cloud, which is often very dark, there are frequently low, ragged clouds, either merged with it or not, and precipitation sometimes in the form of virga. 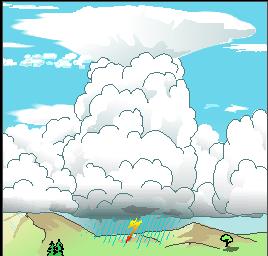